According to Bankrate’s latest Financial Security Index Poll, Americans who have money to set aside for the next 10 years would rather invest in real estate than any other type of investment.

“What is the best way to invest money you wouldn’t need for 10 years or more?”

Real Estate came in as the top choice with 28% of all respondents (3% higher than last year), while cash investments – such as savings accounts and CD’s – came in second with 23% (the same as last year). The chart below shows the full results: 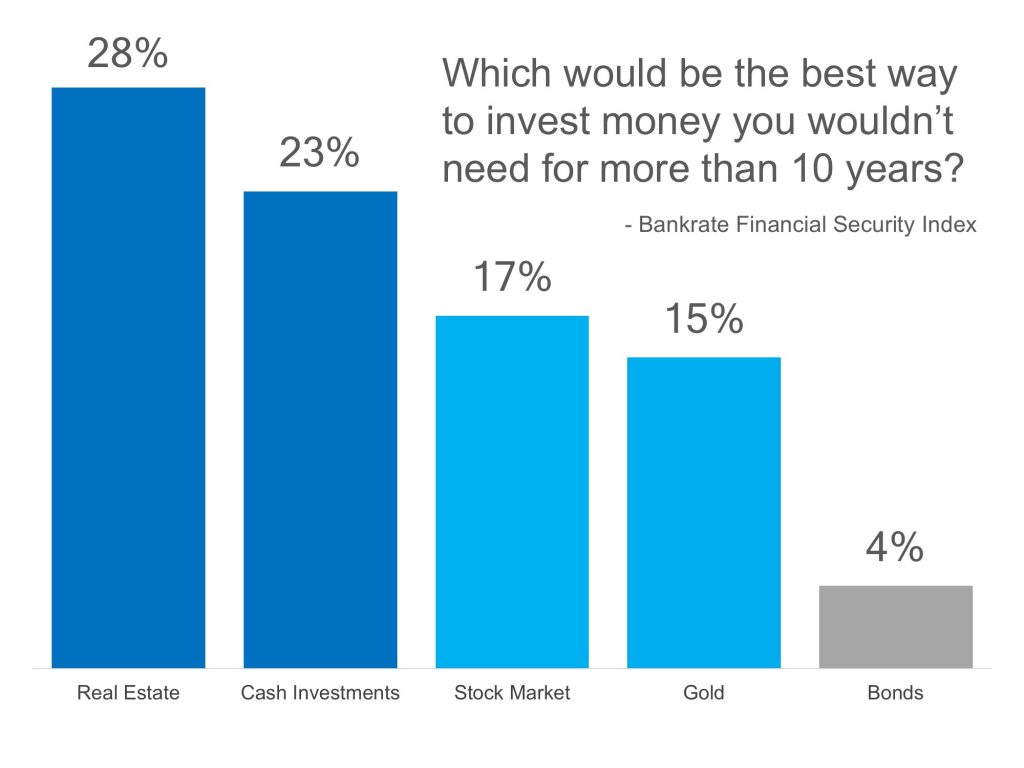 The article points out several reasons for these results:

“After bottoming out at the end of 2011 following the worst housing collapse in generations, home prices have gone gangbusters recently, climbing back above their record pre-crisis levels. Prices jumped 6.6 percent during the 12 months that ended in May, according to CoreLogic.
Toss in persistently low interest rates, tax goodies that come with owning a mortgage, and the psychological payoff from planting your roots, and maybe it’s no wonder real estate remains popular.”

The article also revealed that:

“Bankrate’s Financial Security Index — based on survey questions about how people feel about their debt, savings, net worth, job security and overall financial situation — has hit its third-highest level since the poll’s inception in December 2010.”

We have often written about the financial and non-financial reasons homeownership makes sense. It is nice to see that Americans still believe in homeownership as the best investment.

For ADA assistance, please email compliance@placester.com. If you experience difficulty in accessing any part of this website, email us, and we will work with you to provide the information you seek through an alternate communication method.

Sign Up
Already a User? Sign In
You have been successfully registered
Please check your email.
Go to the homepage
Sorry something went wrong
Please try again.
Try again

Change password
Your password has been successfully reseted.
Go to the homepage
Sorry something went wrong
Please try again.
Try again
Already a User? Sign In